Ethics in the Real Estate Business 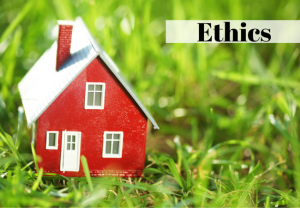 It’s no secret that real estate salespeople do not, by and large, enjoy a very good reputation. Indeed, the true professionals in the business are discomforted by the fact that opinion polls regularly show that the public ranks real estate sales pretty low on the list of occupations whose practitioners are to be admired.

More particularly there are common perceptions that, in the course of their business, many real estate people cannot be depended on to tell the truth, and that they do not hesitate to manipulate others for their own self interest.

Yet the National Association of REALTORS® (NAR), and its state and local affiliated organizations, persistently claim that accountability to a Code of Ethics is a central and predominant fact of membership.

What’s wrong with this picture?

One wrong answer should be laid to rest immediately. It is not the case that the unethical real estate people are predominantly those licensees who don’t belong to NAR, whereas those who are members can almost always be depended upon to be pure and good.

Anyone who has been around the Realtor® associations for a while is aware of the fact that it is a perennial complaint from within the organization that ethical standards are not sufficiently adhered to, and that “something ought to be done…”

Nor is the point that the Code of Ethics itself needs fixing. The REALTORS®‘ Code of Ethics (along with its supplementary Standards of Practice) is both comprehensive and relevant to current business practices. To be sure, because we live in a world of change, it is constantly subject to revisions, amendments, and further interpretive commentary. But it is not the Code that is broken.

The Realtor®organization has a relevant and workable code of ethics, yet many of its members do not adhere to that code. Why?

One possible answer is ignorance.Perhaps there is insufficient knowledge among real estate salespeople as to what they should and should not do. In certain cases there is some plausibility to this. Certainly there are, so to speak, finer points of some ethical matters where one just doesn’t know what the right course of action might be. But, clearly, this does not apply to the vast majority of cases where right or wrong may be determined by central and well-known principles.

More plausible is the claim that the disparity between behavior and the Code of Ethics is a result of the fact that the Code is not sufficiently enforced. No doubt there is some truth to this. Realtor®organizations do not have an ethics police. Although there is a fairly elaborate quasi-judicial system for dealing with violations of the Code of Ethics, that whole system only comes into play when complaints are filed. And, frankly, the filing and pursuit of an ethics complaint is a time-consuming and not particularly pleasant process for the person who has been wronged. Most people would prefer simply to move on.

For reasons of cumbersome process alone, it is unlikely that enforcement at the organization level will ever have much influence on the inclination of practitioners to adhere to the Code of Ethics.

Moreover, if one thinks about it, the point of enforcement in ethics is not to get people to behave in a certain way because they fear punishment. Think of training a child. The point is to demonstrate that the principles are taken seriously; and the aim is that the learner will internalize the values

The ethical behavior of real estate salespeople will improve only when salespeople are shown that their peers, and most importantly, their trainers and employers, take ethical principles seriously. That kind of demonstration cannot be done by the Realtor®association. It can only occur at the level of individual companies and offices.

Let us close the poll  and announce the winner. The majority of votes were for Related services module.

Pilot Group Anniversary: We are Fifteen!

We have come a long way, from a small web design and development agency doing diverse custom projects to […]